Designed to 'Effectively Frustrate': Copyright, Technology, and the Agency of Users 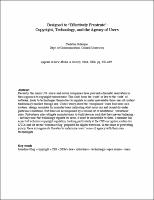 Recently, the major U.S. music and movie companies have pursued a dramatic renovation in their approach to copyright enforcement. This shift, from the ?code? of law to the ?code? of software, looks to technologies themselves to regulate or make unavailable those uses of content traditionally handled through law. Critics worry about the ?compliance? rules built into such systems: design mandates for manufacturers indicating what users can and cannot do under particular conditions. But these are accompanied by a second set of limitations: ?robustness? rules. Robustness rules obligate manufacturers to build devices such that they prevent tinkering -- not only must the technology regulate its users, it must be inscrutable to them. I examine this aspect of technical copyright regulation, looking particularly at the CSS encryption system for DVDs and the recent ?broadcast flag? proposed for digital television. In the name of preventing piracy, these arrangements threaten to undermine users? sense of agency with their own technologies.