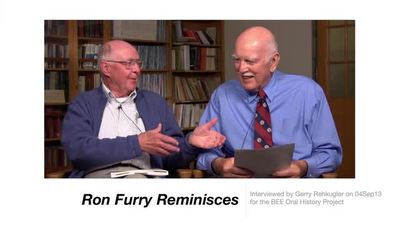 This 50-minute oral history interview traces the life of Ronald Bay Furry from his early days near Niagara Falls, NY and his college days at Cornell University (BS 1953, with Distinction; MS 1955) through his early days in the Department of Agricultural Engineering in teaching and Extension; then, on to a leave at Iowa State University to earn a PhD (1965), followed by a return to Cornell where he spent the balance of his professional career, encompassing 42 years. His doctorate experience allowed him to be a very early leader in the use of digital computers and the teaching of very large and popular courses in digital computer programming. His Cornell career gave particular emphasis to the design of agricultural structures, especially dairy facilities, where he helped design a major Animal Science Teaching and Research Center (ASTARC), and his research on controlled-atmosphere storage of crops, such as cabbage, contributed to the preservation of that industry in the State. He served as the seventh chair of his academic department during 1990-1994. He also served the department as Coordinator of Research and Graduate Faculty Representative, participated in a wide variety of College of Agriculture and Life Sciences, College of Engineering and University responsibilities, including the University Senate and the Faculty Council of Representatives, and established and conducted the department’s undergraduate recruitment program from 1974 to his retirement in 1995.

This video is about the legacy of Ronald B. Furry. Gerald E. Rehkugler conducted the interview on October 4, 2013.