Do Single Mothers in the United States use the Earned Income Tax Credit to Reduce Unsecured Debt? 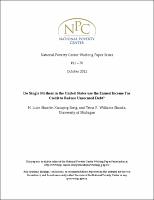