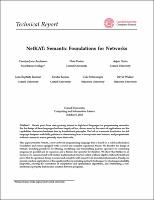 Recent years have seen growing interest in high-level languages for programming networks. But the design of these languages has been largely ad hoc, driven more by the needs of applications and the capabilities of network hardware than by foundational principles. The lack of a semantic foundation has left language designers with little guidance in determining how to incorporate new features, and programmers without a means to reason precisely about their code. This paper presents NetKAT, a new network programming language that is based on a solid mathematical foundation and comes equipped with a sound and complete equational theory. We describe the design of NetKAT, including primitives for filtering, modifying, and transmitting packets; operators for combining programs in parallel and in sequence; and a Kleene star operator for iteration. We show that NetKAT is an instance of a canonical and well studied mathematical structure called a Kleene algebra with tests (KAT) and prove that its equational theory is sound and complete with respect to its denotational semantics. Finally, we present practical applications of the equational theory including syntactic techniques for checking reachability properties, proving the correctness of compilation and optimization algorithms, and establishing a non-interference property that ensures isolation between programs.