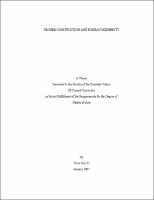 Novels Mujong, Hwanhui, and Kim Yonsil ch'on can be read as a commentary on Korean modernity in their portrayal of women during a specific time in Korean history that is characterized by an abrupt transition from feudal society to modern society. When the enlightenment thinkers in the 1890s first promoted civilization, nationalism and social reform, they targeted the traditions and perspectives defining women?s role in society. Kenneth Wells says in his discussion "Women and the Kunuhoe Movement," "Korean society historically presents an almost prima facie case for using gender as an interpretive framework. The metaphysics, mores, human functions, architectural designs, spatial divisions, and state ideology of the Choson dynasty were so consciously organized with reference to gender principles that instead of a social construction of gender one might justifiably speak of gendered construction of Korean society." I examine this "gendered construction" in modernity and explore its function, its limits, its manifestations and its purported mission. 1894 marked a violent and chaotic turning point in Korean history, which made it clear that the structures of Choson dynasty were no longer able to sustain the internal and external pressures suffocating Korea. 1894 also revealed Korea's failure to process modernity according to its own agendas. In this context civilization, nationalism and social reconstruction did not mean addressing "real" and urgent Korean problems arising from the breakdown of feudal order, economic disparity, social injustices and political chaos, instead it meant privileging and forcing a modern structure that seemed powerful, dazzling and foreign. Yi Kwangsu repeatedly says, "the only way for Koreans to survive would be to bring the Korean people to the same level of civilization as that of all the most civilized peoples in the world, that is, the same level of civilization as that of the Japanese people." (Mujong, 130) I am not strictly adhering to the idea that Korean modernization merely imitated Japanese and European modernization. I want to examine through Mujong how this foreign modernization process, expressed through the new woman and love construct, was internalized. I want to address questions such as what was the significance of love as an ideology during the colonial period? What did it help accomplish and where did it fail? Yi Kwangsu laid the foundation of love as a hegemonic ideological construct in which the new woman becomes the harbinger of society bringing with her the ideas of nuclear family, free marriage and divorce, romance and education. She is the ideal mother who possesses modern refinement and individuality, a symbol of Korea's modern consciousness and progress. Threat of imperialism, which eventually became a reality with the colonization of Korea unleashed several other evils adding to the angst and hopelessness of Korea's already deteriorated state. In part two, I look at the "gendered construction" at this stage in Korean history through Hwanhui (Na Tohyang) and Kim Yonsil ch'eon (Kim Tongin). Each of these novels reveals a different "evil" of modernization under colonialism and provides insight into the limits and manifestation of the modern structures envisioned by the enlightenment thinkers of 1890s. The gender reconstruction in Korean modernity sheds light on Korea's desire for its sovereignty and liberation. It was a social movement that revealed the psychological activities of society at the turn of the century and during its colonization. Set against the political and economical chaos, the reconstruction of gender relationships defined Korea's process through its modernization, but failed in the end to give sovereignty and liberation to its people.