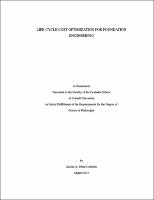 The use of reliability-based design (RBD) in foundation engineering offers several advantages over traditional methods. Uncertainties in the load and capacity terms of the design equations can be evaluated rationally using probability theory, and the resultant probability of failure is a comprehensible measure of risk for non-technical people. However, there are a few drawbacks that have not been addressed effectively so far. For example, it is necessary to select target safety levels, typically from the reliability implied in traditional design methods. Also, the resulting reliability is a nominal value that can be significantly different from the true reliability derived from observed failure rates. This issue is rarely mentioned in the literature, but it affects the utility of probability as a communication tool. In addition, costs are not considered explicitly in the design process, and calculations can be excessively complex and timeconsuming for simple projects. A new framework to determine optimum foundation designs that result in minimum life-cycle costs is presented herein. The traditional approach for design optimization is to minimize an objective function, such as the sum of initial costs and expected cost of failure. Existing optimization methods require a number of initial assumptions and use nominal probabilities of failure, leading to inaccurate results. In the proposed framework, the true probability of failure is estimated using Monte Carlo simulation (MCS) or the first order reliability method (FORM). This process considers the variability of input parameters and the probability of "human errors". Although optimum design parameters can be obtained with the proposed framework, it would not be used in practice often, because it requires knowledge of reliability methods. A simplified approach is necessary to avoid complex calculations and facilitate its widespread use in ordinary projects. Therefore, a simplified method for approximate economic optimization is proposed. In an effort to close the gap between research and practice in foundation engineering, all the calculations shown herein can be reproduced in a simple spreadsheet with nonlinear optimization capabilities.