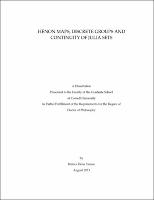 Consider the family of complex H´ non maps H ( x, y) = ( p( x) [-] ay, x), where p e is a quadratic polynomial and a is a complex parameter. Let D be the open complex unit disk and U + the set of points that escape to infinity under forward iterations of the H´ non map. The analytic structure of the escaping set U + is well e understood from previous work of Hubbard and Oberste-Vorth as a quotient of (C [-] D) x C by a discrete group of automorphisms [GAMMA] isomorphic to Z[1/2]/Z. However, the boundary J + of U + is a complicated fractal object, on which the H´ non map behaves chaotically. e We show how to extend the group action to S1 x C, in order to represent J + as a quotient of S1 x C/[GAMMA] by an equivalence relation. We analyze this extension for H´ non maps that are small perturbations of hyperbolic polynomials with e connected Julia sets. The proof uses results of Lyubich and Robertson about the critical locus for H´ non maps and it requires a careful analysis of the invariants of the H´ non e e map. We discovered an invariant function of the H´ non map, which we called e [alpha]. We developed and implemented an algorithm for computing [alpha]. We studied the degeneracy of [alpha] as the Jacobian tends to 0, and came up with an interesting relation connecting the function [alpha] with the group action on S1 x C. H´ non maps with a semi-parabolic fixed point, and their perturbations in C2 , e play an important role in understanding the parameter space of complex H´ non e maps. A fixed point is semi-parabolic if the derivative of the H´ non map at that e fixed point has one eigenvalue [lamda] = e2[pi]ip/q and one eigenvalue smaller than one in absolute value. Semi-parabolic implosion in C2 has been recently studied by Bedford, Smillie and Ueda. They show how to perturb from semi-parabolic H´ non maps such that J does not move continuously with the parameters. e Let [lamda] be a root of unity. For t [GREATER-THAN OR EQUAL TO] 0 real and sufficiently small, we look at the parameter space P(1+t)[lamda] of complex H´ non maps which have a fixed point with e one eigenvalue (1 + t)[lamda]. When t = 0 these are semi-parabolic. We prove that the parametric region {(c, a) ∈ P[lamda] : 0 < |a| < [delta]} of semi-parabolic H´ non maps lies e in the boundary of a hyperbolic component of the H´ non connectedness locus. e We show that for (c, a) ∈ P(1+t)[lamda] and 0 < |a| < [delta], the Julia sets J and J + depend continuously on the parameters as t [RIGHTWARDS ARROW] 0+ .