Creative And Entitled: How The Creative Identity Entitles Dishonest Behaviors 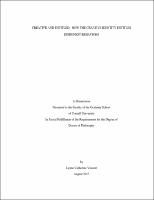