Anthologizing Buddhists: A Study Of Avadana Narratives And The Communities That Read Them In Early Medieval China 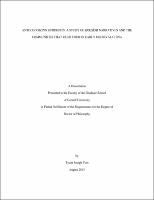 This dissertation is a study of avadāna narratives found in two related anthologies, the Za piyu jing 雜譬喻經 and the Zhong jing xuan za piyu 眾經撰雜譬喻. It has two related goals: to investigate what the Chinese translations can tell us about the functions of avadāna literature in Buddhist practice; and to see what avadāna literature can tell us about the Buddhists who translated and compiled them. My central argument is that the translation and compilation of avadāna narratives into anthologies offers clues about the context in which such anthologies were created. This in turn highlights the different concerns of various Buddhist communities and reflects alternate idioms of Buddhism in early medieval China. I begin by investigating an avadāna narrative through the lens of Indian aesthetics of humor to illustrate the rhetorical function of the story. This approach shows that these narratives are carefully constructed literary productions that offer a window into both the world of the Indic society in which they were initially composed and the Chinese society which translated them. I then look at developments in literary theory to establish a framework that allows us to shift our focus from what is being read to who is doing the reading. I explore notions of the implied reader and the interpretive community as a means of understanding the kind of audience that is assumed in these narratives and the types of concerns the stories are seeking to address. Finally, I investigate the textual form in which the vast majority of avadāna narratives are found: the anthology. Since anthologies are the conscious collecting, ordering and editing of pre-existing narratives, I argue that they illuminate the social context and ideological orientation of the communities that compiled them. By analyzing the structure and themes of these two anthologies we find reflections of two different Buddhist communities: one monastic centered, the other lay oriented. Such an approach provides a means to flesh out and nuance our understanding of Buddhist communities in early medieval China.