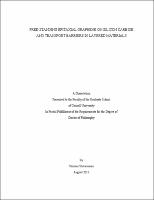 This thesis is based on the topic of layered materials, in which different layers interact with each other via van der Waals forces. The majority of this thesis deals with epitaxial graphene (EG) obtained from silicon carbide (SiC). Free-standing epitaxial graphene (FSEG) structures are produced from EG using a photoelectrochemical (PEC) etching process developed for making suspended graphene structures on a large-scale. These structures are investigated for their mechanical and electrical properties. For doubly-clamped FSEG structures, a unique U-beam effect is observed which causes orders of magnitude increase in their mechanical resonance frequency compared to that expected using simple beam theory. Combined magnetotransport and Raman spectroscopy studies reveal that FSEG devices produced from nominally monolayer graphene on the Si-face of SiC exhibit properties of an inhomogeneously doped bilayer after becoming suspended. This suggests that the buffer layer which precedes graphene growth on the Si-face of SiC gets converted to a graphene layer after the PEC etching process. In the second theme of this thesis, transport barriers in layered materials are investigated. The EG-SiC interface is studied using a combination of electrical (I-V, C-V) and photocurrent spectroscopy techniques. It is shown that the interface may be described as having a Schottky barrier for electron transport with a Gaussian distribution of barrier heights. Another interface explored in this work is that between different layers of MoS2, a layered material belonging to the class of transition metal dichalcogenides. This interface maybe thought of as a one-dimensional junction. Fourpoint transport measurements indicate the presence of a barrier for electron transport at this interface. A simple model of the junction as a region with an increased threshold voltage and degraded mobility is suggested. The final chapter is a collection of works based on the topic of layered materials, which are not related to the main theme of the thesis. They include fabrication and characterization details of a dual-gated bilayer graphene device, an investigation of the graphene-Si interface and hexagonal boron nitride-based membranes. These are presented in the hope that they may be useful for further investigations along those directions.