Origin Of The Inertial Anomaly In Solid Helium-4: Dislocation Dynamics Versus Supersolidity 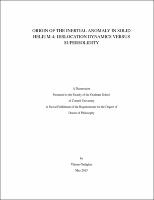 Solid 4 He has been a considered a candidate supersolid, a bosonic crystal with an interpenetrating superfluid component, since 1969. It was not until 2004 however, that Kim and Chan observed an increase in the resonance frequency of torsional oscillators (TO) containing solid 4 He, an observation they interpreted as due to mass decoupling and hence as the first evidence for supersolidity. We introduced a novel SQUID-based TO technique with increased sensitivity and dynamic range, and the generalized rotational susceptibility framework to study TOs containing solid 4 He. Below ~250 mK, the TO resonance frequency f increases and its dissipation D passes through a maximum as first reported by Kim and Chan. We found that equilibration times within f (T ) and D(T ) exhibit a complex synchronized ultraslow evolution toward equilibrium indicative of glassy freezing of crystal disorder conformations which strongly influence the rotational dynamics. Then, by introducing the free inertial decay (FID) technique to solid 4 He TO studies, we carried out a comprehensive map of f (T , a) and D(T , a) where a is the maximum TO rim acceleration. These data indicated that the same microscopic excitations controlling the TO motions are generated independently by thermal and mechanical stimulation of the crystal and moreover, a measure for their relaxation times [tau](T , a) diverges smoothly everywhere without exhibiting a critical temperature or velocity expected for a superfluid-like transition. Following the observations of Day and Beamish, we showed that the combined temperature-acceleration dependence of the TO response is indistinguishable from the combined temperature-strain dependence of the 4 He shear modulus. Together, these observations imply that ultra-slow equilibration of crystal disorder conformations controls the rotational dynamics and, for any given disorder conformation, the anomalous rotational responses of solid 4 He are associated with generation of the same microscopic excitations as those produced by direct shear strain. We report a new apparatus for directly detecting mass flow where the pressure is applied electrostatically throughout the sample by enclosing a reservoir of helium between two plates of a capacitor. Mass flow can be detected by monitoring the capacitance of a second reservoir connected to the first by a set of tubes. We first establish a mass flow detection scheme by measuring acoustic resonances when the apparatus is filled with superfluid 4 He. This acoustic resonance technique provides an opportunity to search for AC mass flow in the kilohertz range, which is comparable to torsional oscillator frequencies. We find no evidence for superflow when the apparatus is filled with solid 4 He. We have developed a new dislocation-vibration model starting with Iwasa's model to obtain both the temperature and acceleration dependence (through an accelerationdependent binding energy) of the frequency shift and dissipation observed in TO experiments on solid 4 He. We provide a physical basis for the initially surprising result that temperature and acceleration have similar effects on the frequency and dissipation. The model captures almost all the essential features of the frequency shift and dissipation over the entire temperature-acceleration plane. This result, along with the argument that there is no evidence for a superfluid-like transition in the relaxation times or superflow provides strong support for dislocation-vibration being the microscopic excitations responsible for the inertial anomaly first reported by Kim and Chan.