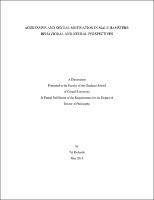 The purpose of this work was to test the social behavior network theory, suggesting that different social behaviors share overlapping neural mechanisms. This was done by focusing on aggressive and sexual motivations, which share many features, foremost among which is that both are stimulus-driven. These two motivations were evaluated using the same novel method, where subjects could push a heavy door towards a conspecific stimulus, with increased pushing reflecting higher motivation. Behaviorally, males tested for aggressive motivation showed increased desire to fight following a winning experience and decreased desire to fight following a losing experience, supporting the validity of the method for quantifying this motivation. Males tested for sexual motivation with diestrous females showed very high levels of pushing, despite these females being aggressive, but similar to the aggression study, motivation was reduced in males who had lost a fight with a female. Neurally, we first compared aggressive and sexual motivation by looking at the neural activation of males that lost a fight with another male and comparing it to that of males that lost a fight with a diestrous female. This analysis found that although the overall activation levels in all SBN regions were not different between the two conditions, evaluating the correlations with measures from the fights showed very different patterns for the two conditions. Males that lost to a male exhibited negative correlations between fight measures and the activation in the various measures, while males that lost to a female showed a much weaker pattern involving mostly positive correlations. Exploring the neural mechanism of aggressive motivation in the motivation apparatus revealed a similar pattern involving only negative correlations despite the wide variety of regions investigated, suggesting that this motivation may simply reflect the lack of inhibition of reaction to a provoking stimulus. The pattern corresponding to sexual motivation in the apparatus was once again entirely different from that of aggressive motivation, although similar to the pattern seen in males that lost to a female. These findings cast doubt on some central assertions of the SBN theory.