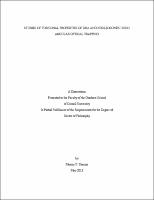 DNA in vivo is subjected to torsional stress due to the action of molecular motors and other DNA-binding proteins. Several decades of research have uncovered the fascinating diversity of DNA transformations under torsion and the important role they play in the regulation of vital cellular processes such as transcription and replication. Recent studies have also suggested that torsion can influence the structure and stability of nucleosomes - basic building blocks of the eukaryotic genome. However, our understanding of the impact of torsion is far from being complete due to significant experimental challenges. In this work we have used a powerful single-molecule experimental technique, angular optical trapping, to address several longstanding issues in the field of DNA and nucleosome mechanics. First, we utilized the high resolution and direct torque measuring capability of the angular optical trapping to precisely measure DNA twist-stretch coupling. Second, we characterized DNA melting under tension and torsion. We found that torsionally underwound DNA forms a left-handed structure, significantly more flexible compared to the regular B-DNA. Finally, we performed the first comprehensive investigation of the single nucleosome behavior under torque and force. Importantly, we discovered that positive torque causes significant dimer loss, which can have implications for transcription through chromatin.