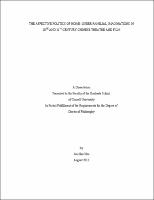 This dissertation studies representative queer texts across various media (literature, theater and cinema) in relation to the changing melodramatic and sentimental modes of representations of home throughout 20th and 21st century China. Depictions of home in modern China are often expressed through these modes; the aesthetics of these modes concerns the ontological question of loss in China's coerced passage into modernity. This melancholic loss is often associated with the constructions of "Chineseness"-cultural attempts to anchor, in the words of Rey Chow, "a non-Western but Westernized" Chinese identity. This project seeks to understand how queerness, as sites of affective excess indicating unresolved social contradictions, intervenes the melodramatic or sentimental tendency towards ideological closures, which secure orthodox Chinese identities. This project identifies four geo-historical sites that provide historical conditions of possibility for queerness to emerge in relation to the notion of home and family. My geo-historical sites of analysis are Republican China, post-Martial Law Taiwan, post-Socialist China and contemporary Taiwan and China. For Republican China, I analyze the case of Ouyang Yuqian and explore his committed theatre career of female impersonation. Through a study of the affective exchange between him and his fans, I demonstrate how this dimension allows him to go beyond the familial ideologies in 1910s family i melodramas and 1920s Nora plays, which led him to create Nora plays that entailed queer desires. For post-Martial Law Taiwan and post-Socialist China, I choose to study the first visible queer texts--in Taiwan, Crystal Boys and Tian Chi-yuan's queer theatre by situating them in the dominant structure of feelings of melancholia and ressentiment; in China, I explore queerness in East Palace, West Palace and Lin Yingyu's adaptation of Jean Genet in relation to the affective politics in dominant root-searching and scar literature movements. From the contemporary moments, I study two self-identified queer activists/independent filmmakers' works-Mickey Chen from Taiwan and Cui Zi'en from China, analyzing how the sentimental or melodramatic mode is deployed in their works. I select those texts for their representativeness as the first queer texts or significant examples that allow us to see the cultural politics of the specific spatial-temporal sites I chose for analysis. This project demonstrates that, in order to understand queerness in 20th-century China, one needs to engage with the afterlives of Confucian familialism, through which Chineseness has been repeatedly constructed to counter the melancholic loss of modernity. ii