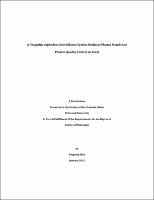 A UBIQUITIN-DEPENDENT SURVEILLANCE SYSTEM MEDIATES PLASMA  MEMBRANE PROTEIN QUALITY CONTROL IN YEAST    Yingying Zhao, Ph. D.  Cornell University 2013    A key function of the ubiquitin-proteasome system is targeting of misfolded proteins  for degradation. In the cytosol, specialized E3 ligases target soluble misfolded  proteins for ubiquitination and subsequent proteasomal degradation. However, the  case is more complicated for integral membrane proteins. Following co- translational insertion in the ER membrane, proteins that fail to fold properly in the  ER are subject to ER-assisted degradation (ERAD), which involves  retrotranslocation of proteins back into the cytosol followed by ubiquitin- dependent proteasomal degradation. Properly folded PM proteins, such as signaling  receptors, ion channels, and nutrient transporters, exit the ER and traffic through  the Golgi to the cell surface where they mediate their specific functions.  Maintenance of proper PM proteostasis, particularly with respect to ion channels  and nutrient transporters, is crucial to prevent loss of PM integrity and dissipation  of essential ion and chemical gradients. As such, when PM resident proteins become  damaged or misfolded, they must be recognized, removed by endocytosis and  delivered to the lysosome for degradation. Thus, cells maintain a "cradle to grave"  quality monitoring system for integral membrane proteins, yet the mechanisms of    iii  quality surveillance, particularly at the PM, remain poorly understood.    Here we present evidence that the E3 ubiquitin ligase Rsp5, the yeast homolog of  Nedd4, is part of a critical protein quality surveillance mechanism at the PM. We  show that proteotoxic stress triggers global activation of Rsp5-dependent  ubiquitination, endocytosis, and vacuolar trafficking of PM proteins. Mutants  defective for this protective response exhibit toxic accumulation of integral  membrane proteins at the cell surface and suffer catastrophic loss of PM integrity  during misfolding stress, phenotypes that can be suppressed by the presence of  chemical chaperones. We present the identification of specific Rsp5 adaptors which  target the ubiquitination of misfolded PM proteins during proteotoxic stress.  Genetic interaction analysis reveals that this PM quality surveillance mechanism  exhibits striking synthetic defects with components of both ERAD and the unfolded  protein response, indicating that different quality control pathways cooperate to  protect cells during misfolding stress. We propose that this ubiquitin-mediated PM  quality surveillance pathway, together with other quality control pathways like  ERAD, protects cells from proteotoxic stress by limiting the toxic accumulation of  misfolded integral membrane proteins at the PM.                iv