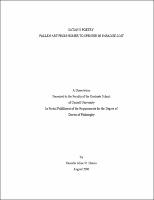 This dissertation reconsiders Satan in Paradise Lost outside of the well-worn hero vs. fool debates by linking Satan's meaningfulness in the narrative directly to the conditions of meaning that underlie the poem. Because Satan is for Milton both the embodiment of fallenness and its cause, his journey through the poem demonstrates how the world in which Paradise Lost constructs itself comes to be. For this reason, "Satan's Poetry" argues that Satan's development in the poem underlies the poem's own development, providing us with a way to understand how the poem situates itself as a part of the fallen world and what it means for it to be thus fallen. The first chapter demonstrates that the language of poetry is the language of Satan, or fallen language more generally, and that this language is negatively constructed, a language of "enigmas" in the Adornian sense. By making this connection between Satan and Milton's poetics, this dissertation then goes on in the second and third chapters to rethink Paradise Lost's relation to its poetic tradition, arguing that this negative language produces negative relationships between individuals (human or poetic) in the fallen world. These relationships demand that we read allusion as the use of old words and images to mean something new, demonstrating Paradise Lost's distance from its predecessors rather than its proximity; reading in this way, as the second chapter demonstrates, allows us to read Milton's poem against multiple texts at once, rather than confining our readings to the linear model of influence relations. The third chapter argues that these differential relationships force us to rethink Milton's tradition not as a coherent whole or "canon" whose authority restricts subsequent literary endeavors, but as a constellation of specific relationships between individual texts that demands creation instead of repressing it. This turn to the creative individual that is the result of the fall is, the final chapter argues, the crucial problem with which Paradise Lost grapples, and "Satan's Poetry" ends by demonstrating that the very negativity that is the symptom of fallenness also bears with it the promise of redemption.