The Nature Of Nature: Environmental Ethics In American And American Indian Literatures From The Seventeenth Century To The Present 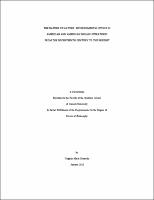 In the Nature of Nature, I define "environmental ethics" in the tradition of Aldo Leopold's "land ethics:" They are the values that inform, influence, and in some cases, direct human relationships with other-than-human beings and the living earth. I argue that specific environmental ethics expressed in American literature from the first colonial settlements through the present have been central to the formation and character of the contemporary American environmental movement and the dominanat public policies and attitudes it has generated. The paradigmatic examples of American literature I explore demonstrate that their environmental ethics are formulated within a Western cultural paradigm that envisions nature as separate from culture and as a collection of resources for human exploitation in a market economy or as a space separated from people who can enjoy it but are never truly part of it. As a result of this philosophical and epistemological separation, I conclude that the American environmental movement and the policies it has generated, while they have to date prevented total destruction of the lands and waters that sustain human beings, have proven ineffective in both preventing and tackling huge environmental challenges like climate change and massive biodiversity decline. Using Arnold Krupat's formulation of ethnocriticism and interpretations of American Indian literatures, I find ruptures in the dominant environmental narratives of the works I explore that are open to the possibility of an alternative vision, one that more nearly aligns with American Indian environmental ethics, ethics I interpret as more centrally based on reciprocity and kinship among humans and the rest of the living earth. While I make every effort to avoid framing Indigenous ethics in an unrealistically utopian context, my literary explorations and analyses emphasize possibilities for engaging these ethics in rethinking dominant models for human relationships to the living earth that sustains us.