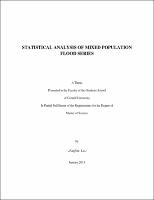 This thesis considers several models for representing the distribution of the annual maximum flood at a site when the annual maximum flood series corresponds to the maximum of two distinct annual flood series. A joint model, that incorporates correlation between the two series, is theoretically correct. However, in most cases, a simpler mixture model essentially does as well. The simple mixture model, which assumes independence between the two distinct series, is a special case for the joint model; it provided a good description of the distribution of the annual maxima above some critical probability, when in our case the risk due to rainfall floods dominated. That critical probability is determined by the distribution of each population, and also the correlation between them. A method recommended by William Kirby uses only the events recorded in the annual maximum series to develop conditional flood risk models for both processes; the resulting flood risk model for the annual maximum series is a weighted function of the two. When compared to use of a single 3-parameter lognormal model, the Kirby Method usually provide more precise estimates of flood quantiles. Overall, for many cases and for extreme quantiles, both the just-rainfall model that models only rainfall, and the mixture model that assumes rainfall and snowmelt maxima are independent, provide flood quantile estimates that are as accurate as use of the full Joint model.