Coffman, William R. (Ronnie)
JavaScript is disabled for your browser. Some features of this site may not work without it. 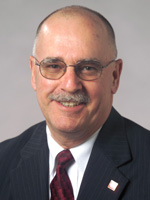 Ronnie Coffman serves as International Professor of Plant Breeding and Director of International Programs of the College of Agriculture and Life Sciences at Cornell University. Named the Andrew H. & James S. Tisch Distinguished University Professor, Ronnie Coffman also serves as principal investigator for the Delivering Genetic Gain in Wheat project and the Next Generation Cassava Breeding project. Previous positions include Associate Dean for Research, and Director, Cornell University Agricultural Experiment Station; Chair of the Department of Plant Breeding and Genetics; and Plant Breeder at the International Rice Research Institute (IRRI). Coffman’s work has been important to the development of improved rice varieties grown on several million hectares throughout the world. He has collaborated extensively with institutions in the developing world and has served as a board member for several international institutes. His Ph.D. is from Cornell and undergraduate work was done at the University of Kentucky, his home state. .