The Metaphysics of Syntax in Nineteenth Century Lyric 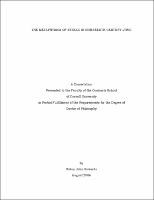 This dissertation takes a new approach to the basic problem of literary criticism, the move from form to meaning, by rethinking the category of form through German Idealism and Chomskyan linguistics. My central methodological thesis is that we cannot develop a framework a priori and then apply it to particular cases, since such a procedure fails to read literary works in their particularity (and hence as literary), and I therefore approach issues in poetics and metaphysics from within interpretations of particular works, interpretations that do not form a unified narrative but rather a web of negative relations. Chapter 1, on Hardy?s The Workbox, traces the shift from Plato?s alignment of form with the universal to Aristotle?s alignment of form with the particular. The Workbox traces the inverse trajectory in matter, revealing the convergence of universality and opacity in death. Chapter 2, on Keats?s To Autumn, focuses on the metaphysics of particularity and the particularity of literature, and introduces synthetic constructions as a way of understanding poetic ungrammaticality. To Autumn is concerned with the relation between a universal nature divinity and her particular manifestations, culminating in an inhuman pagan theodicy. Chapter 3, on Keats?s Ode to a Nightingale, presents a new theory of literary metaphors as synthetic constructions, in order to show that the ode deploys such constructions to think the experience of what is beyond experience. Chapter 4, on Browning?s ?Childe Roland?, argues that Hegel?s speculative transformation of Kant?s conception of objectivity has a terrifying underside that ?Roland? explores, forcing us to re-think collectivity as requiring not only the mediation of the subject by objects but also by a (negatively) divine third term. Chapter 5, on Browning?s My Last Duchess, discusses the relationship between the verse line and syntax to show how the poem exploits the artifice of lineation to become a negative love poem, while Chapter 6 shows how Browning?s Karshish uses the negativity of lineation to rethink the theological, in line with Adorno?s Negative Dialektik, as neither a transcendent Absolute nor a pantheistic immanence, but rather as the immanence of the negative through which immanence exceeds itself.