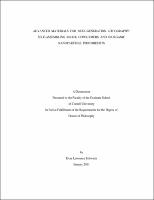 The constant demand for increased circuit density and higher resolution patterning calls for simultaneous advancements in materials chemistry. A variety of possible approaches for next-generation lithography are explored, centering on the use of directly patternable self-assembling block copolymers, along with hafnium oxidebased nanoparticle photoresists. In one example of the first approach, a random copolymer brush layer of poly(styrene-ran-hydroxystyrene) was designed and synthesized to precisely tune the substrate/polymer surface energy for a lithographically patternable poly([alpha]methylstyrene-block-4-hydroxystyrene) (P[alpha]MS-b-PHOST) block copolymer. The surface was designed to avoid preferential wetting of either P[alpha]MS or PHOST domains to the substrate and orient the block copolymer domains vertically relative to the substrate. To neutralize the polymer/ vapor interface during solvent vapor processing, the film was exposed to a mixed solvent vapor of a defined polarity, creating vertical microdomains with long-range order. In the latter approach, hafnium oxide nanoparticles were covalently coated with a photo-reactive ligand, which allowed neighboring nanoparticles to form a crosslinked network upon exposure to ultraviolet light. The basic science of this new class of resist material is discussed. These negative-tone resists have so far demonstrated sub-50 nm resolution using 193nm interference lithography, and plasma etch resistance over thirteen times greater than PHOST under standard silicon etching conditions. In a combination of the two approaches, the co-assembly of the inorganic nanoparticles with the PHOST phase of P[alpha]MS-b-PHOST is shown. TEM and SAXS studies indicated the expansion of the microdomain periodicity upon nanoparticle incorporation. These block copolymer nanocomposite films offer enhanced functionality and a larger process window for subsequent pattern transfer into semiconductor substrates. In another example of co-assembly, phenolic molecular glass photoresists were blended with low molecular weight, triblock copolymer surfactants based on poly(ethylene oxide)(PEO). The miscibility of these blend components is shown to be a result of preferential hydrogen bonding between the hydroxyl groups attached to the molecular glass and the alkyl ether group of the PEO block, as shown by FTIR and DSC analysis. The blending resulted in an enhancement in segregation strength that led to the formation of sub-10nm self-assembled morphologies, as verified by SAXS. Options for the lithographic patterning of these blends are explored. Lastly, a combined additive and subtractive patterning technique is demonstrated that allows the deposition of multiple block copolymer films, of different domain sizes and pitches, on the same layer of the substrate. The approach used a semifluorinated negative-tone photoresist which is designed to resist intermixing when spin coated on top of a block copolymer film.