A Conversation with Cynthia Turner 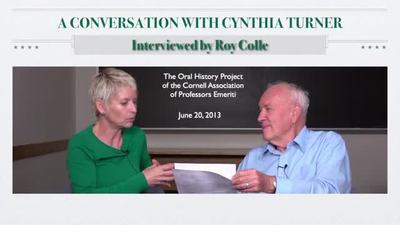 Professor Cynthia Turner tells about another piece to Cornell's global dimension that takes place in a service learning project in Costa Rica. In this July 2013 interview with Royal Colle, Professor Turner, a faculty member in the Music Department at Cornell, tells how students in the Cornell Wind Ensemble, beginning during the winter session of 2006, have played a major role in organizing music-related activities with young people in Costa Rica, including donating instruments to them that the Cornellians collect from various sources in preparation for the Costa Rica ventures. Professor Turner, who joined the Cornell faculty in 2004, is an active conductor, festival adjudicator and clinician in the United States, Latin America, Europe and Canada.

This video is a contribution to the CAPE oral history project.