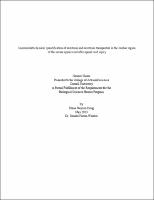 Central pattern generators (CPGs) are important neuronal networks that are made up of interneurons that organize rhythmic motor output such as respiration, mastication, and locomotion. Locomotor CPGs are located in the spinal cord of all vertebrates. Interneurons have been shown to be a necessary part of regulating the coordination of the left and right flexor and extensor muscles that generate the normal walking movement. The V2a interneurons, in particular, play an important role in maintaining a left-right alternating hindlimb pattern at high speeds. Two key players of the CPGs are serotonin (5-HT) and serotonin transporters (SERT). 5-HT plays an important role in enabling the network to generate the locomotor rhythm in rodents, while SERT is responsible for high affinity uptake of 5-HT to terminate its activity in the synaptic cleft. Using double immunohistochemical methods, I determined that not only are 5-HT and SERT co-localized in 5-HT terminals, but also 5-HT and SERT–labeled terminals are located on V2a interneurons. Using Sholl analysis, I determined that SERT and 5-HT show similar co-localization patterns on the V2a interneurons. Although spinal cord injury (SCI) typically does not inflict physical damage to the cells that make up the hindlimb CPG, it results in a loss of motor function by removing descending input from the brain. This in turn can induce changes in CPG cellular activity and transmitter sensitivity. Thus, I sought to observe how SCI affects expression levels of 5-HT and SERT. After SCI, a loss of motor function occurs due to the changes in cellular activity and sensitivity in the CPG. Using single immunohistochemical methods, I determined that both 5-HT and SERT decrease significantly in area and intensity after SCI.