A Conversation with David Robertshaw 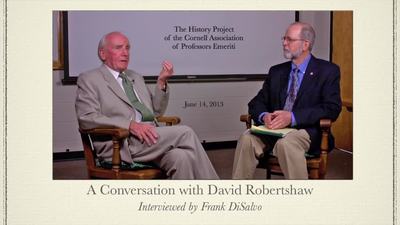 David Robertshaw was born in the UK and obtained his veterinary and PhD degrees from Glasgow University in Scotland. He was then recruited to Kenya on three different assignments the last being as the inaugural professor of veterinary physiology at the new University of Nairobi. He then became professor of physiology in the Biomedical Sciences program at the Bloomington campus of Indiana University Indiana and joined the College of Veterinary Medicine at Cornell after an appointment at Colorado State University. In 2000 he transferred to Weill Cornell Medical College and became the founding Associate Dean at the branch campus of the medical college established in Qatar. He retired in 2008 and was subsequently appointed as a Fulbright Specialist, his first assignment being to the new and first university in Nazareth in the Galilee region of Israel.His career thus spans four continents with a focus on emerging centers of higher education, in most cases it being an unplanned and evolving process.

This video is a contribution to the CAPE Oral History Project.