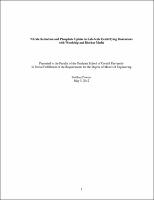 High nutrient loads in agricultural-field-adjacent waterways results in ecosystem-debilitating hypoxic zones. One potential solution for this problem is a denitrifying bioreactor, which intercepts the high nutrient (usually phosphate and nitrate from fertilizer) water from artificial drainage. This study aimed at modeling a denitrifying bioreactor in a laboratory setting, with woodchip media acting as a carbon source, and further amended by biochar in some of the experimental reactors. Water spiked with nitrate and phosphate was fed through the reactors and the concentrations were measured at both the inflows and outflows. The predicted pathway for nitrogen reduction was denitrification and the phosphate was expected to be adsorbed by the biochar. Both woodchip and biochar-mix (10% biochar, 90% woodchip by mass), had levels of nitrogen reduction above 30% with an inflow of about 5 mg Nitrate-N/L, with the biochar-mix achieving higher levels of reduction than the plain woodchip media. The phosphate uptake was no different between the woodchip and biochar-mix bioreactors across various inflow concentrations, however these influents were higher than intended for the purpose of this study. Thus, in these experiments, both woodchip and woodchip-biochar mix bioreactors decreased the nitrate concentration between inflow and outflow, but with different pathways- denitrification for woodchip and most likely adsorption for biochar-mix. Phosphate adsorption did not occur more within the biochar-mix reactors. In this study, though biochar as a bioreactor amendment was not useful in enhanced phosphate concentration reduction, its presence was indicative of higher nitrate removal so an in-situ bioreactor might benefit from subsisting of both biochar and woodchips to decrease the probability of eutrophication in adjacent waters.