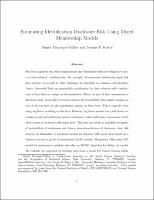 Statistical agencies and other organizations that disseminate data are obligated to protect data subjects' confi dentiality. For example, ill-intentioned individuals might link data subjects to records in other databases by matching on common characteristics (keys). Successful links are particularly problematic for data subjects with combinations of keys that are unique in the population. Hence, as part of their assessments of disclosure risks, many data stewards estimate the probabilities that sample uniques on sets of discrete keys are also population uniques on those keys. This is typically done using log-linear modeling on the keys. However, log-linear models can yield biased estimates of cell probabilities for sparse contingency tables with many zero counts, which often occurs in databases with many keys. This bias can result in unreliable estimates of probabilities of uniqueness and, hence, misrepresentations of disclosure risks. We propose an alternative to log-linear models for datasets with sparse keys based on a Bayesian version of grade of membership (GoM) models. We present a Bayesian GoM model for multinomial variables and off er an MCMC algorithm for fitting the model. We evaluate the approach by treating data from a recent US Census Bureau public use microdata sample as a population, taking simple random samples from that population, and benchmarking estimated probabilities of uniqueness against population values. Compared to log-linear models, GoM models provide more accurate estimates of the total number of uniques in the samples. Additionally, they offer record-level predictions of uniqueness that dominate those based on log-linear models.

Journal of the American Statistical Association