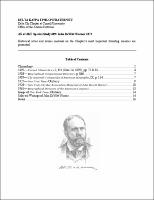 The life of DKE Brother John DeWitt Warner '72 is recounted with a brief chronology and transcriptions of several published biographies. Warner was a distinguished statesman, attorney, classics scholar and patron of the arts. He provided critical leadership to the Delta Kappa Epsilon Fraternity during the period of centralization circa 1881-1890 and to the Delta Chi Chapter at Cornell University when the 13 South Avenue lodge was conceived and finally dedicated in 1893.