"I contain multitudes": Chimeras, cells and the materialization of identities 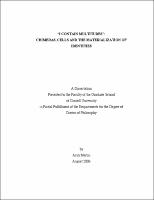 This dissertation traces the biomedical networks through which human chimeras are clinically constituted. Chimeras are organisms in which two or more genetically distinct cell populations co-exist. Unlike their experimentally produced counterparts (often interspecies mixtures), human chimeras arise spontaneously when fraternal twin embryos fuse in the womb. While undoubtedly a rare occurrence, the true incidence is unknown because many chimeras have no visible signs of their composite being. Hence, chimeras are produced in an inadvertent encounter with the laboratory, during blood donation or tissue typing, for example. A subtype of chimerism, called microchimerism, occurs when the second cell population is tiny. The main context in which microchimerism is discussed in biomedical research is cell exchange between women and their fetuses, now thought to be a normal event during pregnancy. Human chimerism has existed since the 1950's, and microchimerism has become a research theme only in the last decade. Like multiple personality disorder, conjoined twinning and organ transplantation, human chimerism troubles the connection between the individual and the body. Bodies, in these cases, are not neatly contained, which calls into question the inevitability and naturalness of singular embodiment. Chimerism, in particular, offers an analytical vantage point for the examination of genetics and identity in contemporary biomedicine. Using historical and ethnographic methods, and analytical tools from science & technology studies, this dissertation explores human chimerism and microchimerism. Interviews with scientists and careful analyses of published and unpublished literature reveals that biomedical researchers speak and write as though cells and people are interchangeable; not only do people contain cells, cells contain people. This tendency is an instantiation of genetic reductionism (we are our genomes), but it also refers to much older Western traditions wherein the material of the body is one and the same as the person. In chimerism, though, ascribing personal identity to cells leads to a confusion of the boundaries by which individuals are normally separated. While the location of personhood in cells is no doubt a reductionist tendency, the result - the fragmentation and interspersion of selves - leads to a provocative anti-reductionist conclusion: we all contain multitudes.