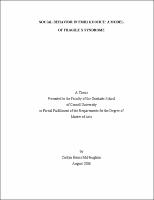 The fmr1 "knockout" (KO) mouse is a model for fragile X syndrome, the most common form of heritable mental retardation (Hagerman, 2002). The present study was designed to further assess the validity of this mouse model. Specifically, in light of the prominence of social anxiety in the human FXS phenotype, the present study assessed various aspects of social behavior in fmr1 KO mice and wild-type (WT) littermates. A three-chambered apparatus was used to assess: (1) the preference for being near a novel conspecific vs being alone; and (2) the preference for a novel conspecific vs. a familiar one. In the first phase, experimental subjects were exposed to a restrained unfamiliar male mouse in one of the side compartments. Subsequently, in the second phase, a second unfamiliar male mouse was restrained in the opposite compartment. In both phases, square crossings, the time spent in each area, sniffing each restraining cage, rearing, grooming and wall climbing were measured. The results revealed that both the KO and WT mice preferred to be near a novel conspecific rather than to be alone; the magnitude of this effect was comparable in the two genotypes. Preference for a novel conspecific over a familiar conspecific was also seen in both groups, but only when the stimulus mouse was a preferred animal. When a non-preferred stimulus mouse was the novel animal, both groups showed a diminished novelty preference, but the magnitude of this effect varied by genotype. Under this condition, the WT mice showed a more pronounced negative reaction to the non-preferred mouse than did the KO mice. In addition, two other genotypic differences indicated that the KO mice may have been more anxious than controls in these social encounters: (1) a greater proportion of the KO mice had high total grooming times; and (2) the average duration of nose contact with the stimulus mouse was significantly shorter for the KO mice than for controls. These results provide further support for the validity of this mouse model, although future studies are needed to more fully characterize the social behavior alterations in the fmr1 KO mouse.