The International Criminal Court, Sovereignty, and the United States: global power and the case for non-participation 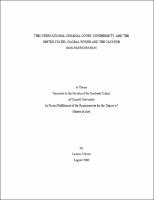