Animal Science at Cornell University 1963 - 2000: Observations and Reflections of an Insider 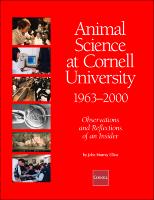 This is an update to the 1987 book by Kenneth L. Turk, Animal Husbandry at Cornell University: A History and Record of Development from 1868 to 1963 prepared by a retired (1991), succeeding Department Chair, J. Murray Elliot. Former chairs provided suggestions of what they considered significant items during their administrations. From the beginning it was agreed that this volume would be relatively brief, without some of the detail that characterized Ken Turk's history. Somme additional information has been made available on the department web site (www. ansci.cornell.edu), rather than including it in the new volume. Although individual faculty members have received numerous local, regional, national, and international awards recognizing their superior accomplishments in research, teaching, and extension, no attempt has been made to develop an exhaustive list of such honors. Where deemed appropriate, however, many of the more important of these awards are woven into the narrative. The present effort also differs from Ken's in many other respects and is more accurately described as "observations and reflections" than as "history". No doubt my items worthy of note during that and especially other time periods have been overlooked.

College of Agriculture and Life Sciences at Cornell University