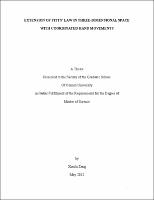 Fitts' Law is a powerful model of human movements that predicts the time that it takes to move to targets of different widths and at different distances. It has been widely used in the field of human-computer interaction and in the design of the Graphical User Interface (GUI), and it is often a measure of the ergonomic acceptability of a cursor-positioning device. When first proposed in 1954 it was applied to one-dimensional (1D) and twodimensional (2D) pointing tasks. Since that time numerous researchers have verified and extended Fitts' law to include three-dimensional (3D) tasks. Various modifications have been proposed for a variety of situations. Factors that might have an effect on the model have also been studied. The extension of Fitts' law to 2D space has been well documented, however research on the extension to 3D space has been restricted due to limitations of input device designs. The recent development of 3D input devices, such as the Kinect system launched in 2010, allow accurate gesture recognition and 3D gesture control of a computer interface. This research was conducted to test the application of Fitts' law to coordinated hand movements in a 3D response space. A laboratory experiment was conducted in which 20 participants performed pointing tasks involving varying target distances, target sizes and approach angles using both Left Hand Move and Right Hand Click (LMRC) and Right Hand Move and Left Hand Click (RMLC). Quantitative measures of movement time and qualitative measures of fatigue etc. were gathered. Video recordings of the participants' movements from three directions were used to analyze posture.   3   Results confirmed that Fitts' law applies to coordinated hand movements in 3D space. No significant gender difference was found for either the movement time or the response postures. Participants mainly reported that the tasks were fatiguing. The main limitation of this study was that the software used in the experiment caused noticeable cursor vibration. Software that can provide a more stable display might be an improvement. In the future, more appropriate gestures and tasks could be found for testing the usability of 3D gesture control of computer interfaces.   4