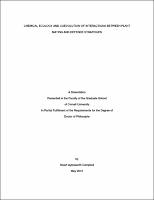 Sexual reproduction is ubiquitous and variable both within and among species. This variation has profound consequences (inbreeding depression, ID), which may explain why so many species avoid inbreeding. However, we know little about how such variation influences the ecology of antagonistic species interactions (predation, herbivory, parasitism). Consequently, we also know little about whether such interactions in turn play a significant role in the evolution of mating systems. I investigated how plant mating strategies (outcrossing and inbreeding) affect the chemical ecology and evolution of interactions with insect herbivores. At an intraspecific scale, I conducted experiments with wild horsenettle, Solanum carolinense (Solanaceae). Inbreeding deleteriously affected expression of defence-related secondary metabolites and resistance to insect herbivores in both the laboratory and field. Inbreeding disrupted phytohormone-mediated regulation of growth and defence responses, providing the first evidence of a hormonal basis to plant growth and defence responses to inbreeding. In the field, natural herbivory by flea beetles (Epitrix spp.) for three years led to significant ID for growth and fitness; in contrast, protection from insect herbivores almost completely alleviated the strength of ID. Thus, herbivore-mediated, ecological inbreeding depression could maintain outcrossing mating systems. I then examined mating system-defence interactions at a macroevolutionary scale. In the Solanaceae, outcrossing is enforced by a self-incompatibility mechanism that is ancestral, but has been irreversibly and repeatedly lost, allowing me to test the consequences of evolutionary mating system shifts for the macroevolution of defence. A phylogenetically-controlled study of constitutive and induced resistance in over 20 self- incompatible and 30 self-compatible species, including petunia, tobacco, pepper, tomato and potato taxa, showed that mating and defence strategies have evolved in a correlated fashion: shifts from outcrossing to inbreeding mating systems are associated with reductions in constitutive resistance to Manduca sexta caterpillars, but strong and significant increases in inducibility of resistance traits. Across the family, mating systems exhibit divergent, but significant negative correlations between inducible and constitutive resistance strategies, providing the first robust phylogenetic evidence that these may be evolutionary alternatives. I conclude that the sex life of plants may be an important, unappreciated force in the ecology and evolution of insect-plant interactions.