Essays On The Behavior Of Firms In The Indonesian Labor Market 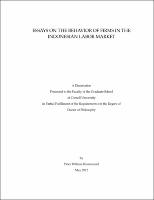 The greatest productive asset for most people in the world is their own labor. Many poor people employ their labor in subsistence agriculture or in informal jobs. A direct route to lift these people out of poverty is to move them into formal sector jobs which provide higher wages and more benefits. It is also important for poverty alleviation to improve the wages and benefits provided to people already working in formal sector jobs. The more people that can be employed in formal sectors jobs with higher wages, the fewer people there will be living in poverty. My research deals with issues in this arena. The first chapter investigates whether firms behave monopsonistically, which would result in lower wages and lower employment than a competitive outcome would. The results show that about 60% of the manufacturing firms do behave monopsonistically in the labor market. The second chapter analyzes the impact of increased firing restrictions on the behavior of firms, and finds that labor costs increase, output decreases, and the capital-labor ratio increases. The third chapter looks how big of an impact the monopsonistic behavior of firms has on the poverty rate in Indonesia, and finds that poverty would be 8.5% to 23% lower if firms behaved competitively in the labor market.