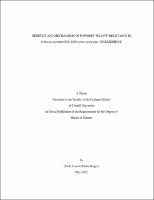 The powdery mildew fungus, Erysiphe necator, is a major pathogen of cultivated grapevines, causing significant losses worldwide. Natural sources of resistance can be found among North American grapevines that have co-evolved with the pathogen. Introgression of resistance from wild species into cultivated backgrounds is hampered by long generation times and genetic linkage with undesirable traits. Molecular markers are excellent tools that help to overcome these problems by facilitating the introgression of one or several resistant loci, reducing linkage drag, while maintaining the cultivated backgrounds that are associated with good quality. This work sought to understand the genetics and mechanisms of powdery mildew resistance from the wild Vitis rupestris B38 and cultivated V. vinifera 'Chardonnay', while developing a dense set of molecular markers located in the physical grape reference map and analyzing their association with powdery mildew resistance. Phenotype segregation among progeny of the cross V. rupestris B38 x 'Chardonnay' was studied following natural infection during three growing seasons, as well as in a screenhouse, and by a single-isolate, detached leaf inoculation. Powdery mildew resistance in the progeny of V. rupestris B38 x 'Chardonnay' was not controlled by a single resistance gene, but showed quantitative segregation. Evidence for the action of several foliar resistance mechanisms, including penetration resistance, differential response to pathogen genotypes, and ontogenic resistance was found. Molecular markers were derived from Next-Generation Sequences (NGS) of DNA fragments from parents and progeny obtained by Genotyping-by-Sequencing (GBS), and were used to develop a dense map of 16,834 Single Nucleotide Polymorphisms (SNPs). This map covered both the assembled and unassembled portions of the grape reference genome sequence, with an average density of 36 SNP/Mbp. This is the most dense map published to-date and represents an improvement of about 15-fold over the current standards for grapevine genetics. A Genome-Wide Association Study (GWAS) was performed to localize and quantify the effect of markers linked with resistance to powdery mildew. GWAS led to the identification of 16 SNPs on 'Chardonnay' associated with susceptibility and 9 resistance-associated SNPs from V. rupestris B38. Field observations indicated that resistance loci from V. rupestris do not provide an adequate level of protection in the F1, but single isolate microscopy results suggested that V. rupestris resistance could provide protection to specific races of powdery mildew. Moreover, identification of susceptibility loci in a V. vinifera background can be used to improve powdery mildew resistance by selecting against their presence among breeding selections. Together, results presented in this work help to understand the nature of resistance in V. rupestris B38 and 'Chardonnay', while developing relevant tools for grapevine genomics and breeding.