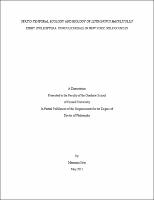 Listronotus maculicollis Kirby (Coleoptera: Curculionidae) is a serious pest of golf course turf in the northeastern United States and eastern Canadian provinces. To enhance current management strategies and to introduce novel management approaches, phenological, ecological and physiological characteristics of L. maculicollis were investigated. A three-parameter nonlinear logistic model, using 7.2 ˚C as a lower developmental threshold, was fitted to field-collected data of different developmental stages of two beetle populations from golf courses in New York and described their population accumulation patterns as a function of the degree-day accumulation within ± 7 days. The best models were further tested in a validation study encompassing sites that represented geographic/climatic ranges where L. maculicollis was known as a pest. Observed data tended to follow model predictions with respect to general pattern. Discrepancies were primarily due to faster population accumulation rates of each stage and/or greater synchrony than predicted. The results indicated site-specific variations in phenology. Further investigation about the effects of phenotypic plasticity, photoperiod, and adaptation to local habitat conditions on the phenology was suggested. The spatio-temporal dynamics of L. maculicollis, P. annua, and damage were investigated. Damage aggregated at the periphery of the fairway, the primary reproduction site for the beetle. It was spatially associated with larval density, thatch depth, and soil nitrate concentration. The crown feeding larvae and thatch (surface organic matter) were significantly associated with the occurrence of the damage. Association analysis indicated the crown feeding larvae were the primary cause of the damage and thatch provided a physical environment that was suitable for insect feeding and/or antagonistic to the plant's tolerance to the feeding. There was no significant association between P. annua density and plant damage or insect density. This result indicated that L. maculicollis pattern of colonization of turf areas was due to the physical environment that transitioned from high-mown turf to short-mown turf rather than a particular preference for P. annua. The fecundity of field-collected adults greatly differed between spring and summer. After the immigration to fairways from the overwintering site in April, the overwintered adults continuously oviposited eggs through June with great individual variation in number (0-84 eggs/individual). On the other hand, in July, when the majority of the field-collected adults were considered to be new adults of the following generation, they rarely laid eggs. The results challenge the current interpretation of L. maculicollis voltinism and indicated that the appearance of multiple generations might arise from the variation in the number of eggs oviposited by the overwintered adults and the continuous immigration of overwintered adults. Rearing methods with artificial diet and plant material were investigated. The developmental times of the insect, from egg to adult, on lettuce diet were normally distributed with large variance (25-113 days). This variation is a possible explanation of observed asynchronous populations in the field. The results imply the necessity of modifying the conventional views of the seasonal changes of L. maculicollis development that were largely based on anecdotal observation.