Essays On The Economics Of Innovation 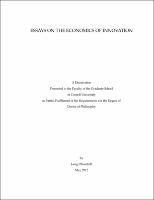 This dissertation examines the allocation of inventive ideas through the trade of patent portfolios, the measurement of inventive output and the design of mechanisms to encourage investment in research and development. The first chapter introduces a new data set of patent portfolios traded between 1990 and 2011 consisting of 2,045 granted U.S. patents and patent applications. Combined with a random sample of all patent portfolios traded in 2005, this new data set allows for the derivation of estimates of the size of the market for patents, which is estimated at $10 billion in 2005. The average value of a traded patent is about $505,000. Patent portfolios acquired by patent assertion entities (PAEs)-companies that purchase patents without the intention of using the underlying technology internally, but instead focus on the assertion of the purchased patents against manufacturers already using the technology-account for about $380 million or 3.8 percent of the total market. The litigation rate for traded patents is 2.3 percent during the acquiring entity's term of ownership. Patents acquired by PAEs do not have an increased likelihood of being litigated compared to other traded patents. The second chapter examines field trial data for patented corn hybrids to quantify the relationship between patents, citations, and the magnitude of inventive output. Field trial data for 256 corn hybrids patented between 1986 and 2005 suggest that most patented corn hybrids do not improve significantly on prior art: 58 percent of patented hybrids produce less corn than existing hy- brids. However, there exists a relationship between the number of subsequently granted U.S. patents citing a patent in our data and the magnitude of inventive output: A 10 percentage point increase in yields is associated with 1.9 additional citations. The third chapter examines the optimal design of mechanisms of awarding patents and prizes under different information environments. Using the full information environment as the benchmark, I analyze the case in which information about the value of an innovation is either (i) only observed by the innovating firm or (ii) observed by the innovating firm and another firm in the same industry. In general, the social planner awards prizes whenever these are available as a policy instrument. While there exist mechanisms to reveal the social value of an innovation under the private information environment, truth telling can only be achieved by providing some patent protection in most of the considered cases. The social surplus is then lower than the full information benchmark. When market information about the social value of an innovation is available from a competitor, the social planner can achieve the same level of social surplus as in the full information benchmark.