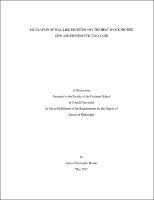 Toll-like receptors (TLRs) represent the innate immune system's first line of defense against invading pathogens. TLRs are germline encoded type I transmembrane proteins that recognize pathogen associated molecular patterns (PAMPs) which tend to define broad classes of pathogens. TLRs exhibit both surface and intracellular localization. This global cellular distribution of receptors facilitates detection of PAMPs expressed on the surface of foreign organisms or encapsulated within them. In the case of nucleic acid-sensing TLRs, this distribution is also a regulatory mechanism, protecting the host from harmful response to self-nucleic acids. TLR9 primarily detects microbial DNA, however, when self-DNA is in complex with HMGB1, anti-nuclear antibodies, or an ant imicrobial peptide such as LL37, it is delivered to TLR9 in endosomes and can elicit inflammatory pathology. In this dissertation, I investigated the roles that the heat shock protein gp96 and proteolytic cleavage play in regulating TLR9 trafficking and signaling. gp96 was known to be essential for proper folding of TLRs, including TLR9, in the endoplasmic reticulum. However, treatment with a novel gp96 inhibitor, WS13, suppressed CpG DNA induced NF-[kappa]B activation, MAP kinase ERK phosphorylation, and TNF-[alpha] secretion, indicating additional roles for gp96 in TLR9 biology. TLR9 and gp96 were found associated in the lysosomes of stably transfected HEK293 cells. Inhibition of gp96 caused proteolytic cleaveage of TLR9 to an 80 kD form identical in molecular weight to the proposed mature form of this receptor, however, signaling was inhibited under these conditions. Furthermore, proteolytic cleavage is not universal among all cell types. Induction of proteolytic cleavage in HEK293 cells, which do not normally generate the 80 kD mature form of TLR9, inhibited CpG DNA-induced NF-[kappa]B activation. A retroviral construct analogous to the mature form of TLR9 failed to reconstitute CpG DNA induced responses in HEK293, macrophages and dendritic cells. This inability to respond to CpG DNA correlates with an inability to traffic outside the ER compartment. In summary, this dissertation explores the regulation of TLR9 signaling by gp96 and proteolytic cleavage. Better understanding of the mechanisms which regulate TLR9 signaling may result in new drug targets for the treatment of autoimmune diseases.