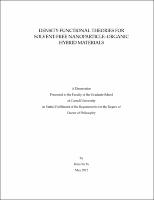 Density-functional theories are developed to address the equilibrium structure, solvent behavior, disordered-fluid-fcc-solid transitions, and the transport properties of solventless nanoparticle-organic hybrid materials (NOHMs) consisting of nanoparticles with tethered oligomers with no solvents. The coarse-grained model of hard spheres and attached bead chains combined with the assumptions of incompressible oligomers, faster relaxation of oligomers than core particles, and large ratio of the oligomer radius of gyration to the core radius that is useful to make a weak oligomeric-field approximation allows quasi-analytic determination of the equilibrium distribution function of the cores and the concentration field of oligomers, which then determine the system free energy. The static structure factor for monodisperse NOHMs shows zero value at zero wave number, indicating that each core carries the same amount of the fluid. Including bidispersity in the system leads to non-zero structure factor at zero wave number with stronger effects resulted from bidispersity in the oligomer grafting density than bidispersity in the core size. When the oligomers are short compared with the interparticle spacing, the entropic frustrations due to limited oligomer configurations yield stronger oligomer-mediated particle-particle correlations characterizing the entropic attraction among the cores. Meanwhile, higher solvent capacity is predicted as the solute releases the entropic penalty of oligomers. This thermodynamic driving force for solute uptake yields good CO2 selectivity over N2 and CH4 in NOHMs compared with unattached PEG melts or ionic liquids because the lower affinity of CO2 for oligomers make the chains retract and reduce more of the free energy. Since many neighboring particles cooperate in filling the space, solventless NOHMs can remain disordered even if the core volume fraction is above the freezing transition point of hard-sphere suspensions. Transport properties such as the long-time self-diffusivity and linear viscoelastic behavior are determined by solving for the non-equilibrium probability density function for pairs of particles subjected to a weak applied flow and many-body intercore potential of mean force without hydrodynamic interactions. Again, the theory predicts hindered particle dynamics as the stiffer oligomers feel more entropic penalty to fill the space.