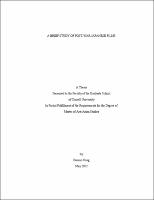 This thesis explores the inner meanings conveyed in two post-war Japanese films: To live (Ikiru 1952) directed by Akira Kurosawa and Villon's Wife (Viyon no tsuma 2009) by Negishi Kichitarō. Both films are analyzed cinematographically, and compared and contrasted for the directors' different interpretations of issues posed by the postwar in Japan. In my discussion of Kurosawa's Ikiru, the work of several critics (James Goodwin, Mitsuyo Wada-Marciano, Stephen Prince, Tsuzuki Masaaki and others's) is presented and discussed in the first part of the thesis. The film Villon's Wife, and the original novel by Dazai Osamu, are studied together with Seki Reiko's and Hirano Ken's interpretations of the fiction in the second part of the thesis. Kurosawa's production of Ikiru reflects an attempt to heal the nation and the populace from the hell of defeat, while Kichitarō's Villon's Wife is a remarkable break away from the frame of the original novel and provides a progressive view of women's ability to transform their lives.