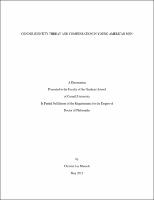 This dissertation addresses why young men are disproportionately more likely than young women to engage in a host of adverse behaviors including violence, infidelity, drinking and risk-taking. I refer to these behaviors as gendered behaviors. Drawing on social identity theory and theories of gendered interaction, I develop an interactional theory of gendered behavior and suggest that challenges to one's status as a prototypical man, otherwise known as gender identity threat, leads young, heterosexual men to engage in stereotypically male-typed behaviors. Study 1 examines the effect of gender identity threat on infidelity. Using panel data from the 1997 National Longitudinal Survey of Youth, I examine the role of economic dependency, a proxy for gender identity threat, on infidelity in young men. I find that economic dependency increases the odds that married men will engage in extramarital sex. Economic dependency does not increase the odds of cheating for cohabiting men. Study 2 experimentally investigates the effect of gender identity threat on anti-gay aggression. Findings show moderate support for the theory. While not all threatened men display more anti-gay aggression, certain marginalized groups of men do. This study also makes a unique methodological contribution in that it cultivates a new paradigm for the study of aggression in laboratory settings. Study 3 seeks to understand the ways young men define masculinity, experience threats to masculinity, and respond to emasculation. Analysis of 44 in-depth interviews with undergraduate men reveals a core of characterizations and behaviors these men use to define masculinity. When they fail to live up to this definition of masculinity, or are held accountable by their peers for failing to live up to this definition of masculinity, they experience gender identity threat. The majority of young men use healthy strategies to deal with these threats. However, less often, young men respond to gender identity threat by engaging in adverse gendered behaviors including drinking and drug use, risk-taking, violence, aggression towards women, and sexual coercion. Together, these studies suggest that many of the deleterious behaviors associated with young masculinity stem from identity insecurity and cultural definitions of "appropriately" masculine behavior.