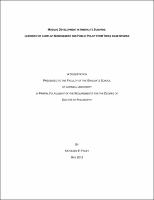 MOSQUE DEVELOPMENT IN AMERICA'S SUBURBS: LESSONS FOR CONFLICT MANAGEMENT AND PUBLIC POLICY FROM THREE CASE STUDIES KATHLEEN E. FOLEY, PHD CORNELL UNIVERSITY, 2012 This dissertation asks what factors motivate and mitigate conflict around mosque developments proposed by Muslim American faith communities of immigrant origin in America's suburbs- areas which, since the early 1990s and because of emerging immigrant settlement patterns, have experienced the greatest increase in mosque development as well as the most incidents of related turmoil. Using a case study approach, the work examines the importance of traditional land use concerns in these proposals, as well as fears and biases formed in response to the post-September 11th, 2001 geopolitical climate. The study finds that the latter, although headline-catching, are not necessarily the leading motivations for resisting mosque development. Comparative analysis determines that strategies used to address and overcome exclusionary tactics mounted against low-income housing developments, mental health facilities, utilities and other locally unwanted land uses are applicable to conflict management in mosque proposals. The findings further establish the importance of proactively accommodating religious land uses in comprehensive planning exercises, and identifies the utility of the process requirements of the Religious Land Use and Institutionalized Persons Act of 2000 (RLUIPA) as neutralizing agents in tense and emotionally-charged hearing environments. Public planners and municipal officials well-trained and experienced in conflict management and religious land use stewardship are shown to be more effective agents in mitigating conflict than those without the same skill set. For faith communities, the positive influence of careful site selection, neighborhood outreach and education efforts, interfaith coalition building and ongoing civic engagement is revealed. Additionally, the research explores the ways that conflict and negotiation in public review processes are influencing the design choices of Muslim American communities and shaping the form of the mosque in the United States.