Ecology And The Evolution Of Anti-Predatory Morphology Within Busyconine Whelks: A Pliocene To Recent Perspective 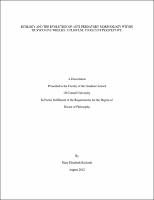 My dissertation focuses on the ecological circumstances associated with the evolution of heavily ornamented morphologies within Busyconine whelks. Busyconine whelks display a variety of shell forms in the Recent and fossil record, with heavily ornamented shells concentrated in the southern part of the modern species Busycon carica's range. In the fossil record, heavily ornamented shells recur in temporally disjunct populations over variable geographic extents from the Pliocene onwards. I investigated the function of shell sculpture (such as the tumid ridge, increased shell thickness, and spines), as well as fitness costs (such as reduced growth) associated with producing and maintaining heavily ornamented shells. I used stable isotopes to construct growth curves, and compared growth estimates to prior studies throughout B. carica's range. In modern populations of B. carica, increased ornamentation confers a significant benefit when dealing with shell crushing predators. Growth curves constructed from stable isotopes show a latitudinal trend in growth rates, with slower growth in northern populations, and also revealed diminished growth in the south within populations for heavily ornamented individuals, as compared to weakly ornamented individuals. Some prior growth studies have ignored episodicity of growth in Busycon; this has led to inaccurate estimation of rates. Future work should focus on both incorporating intervals of non-growth into models derived from markrecapture studies, and also on further examining growth costs associated with the development of heavily ornamented morphologies. This work also highlights the importance of standardizing for growth rates, body size, and degree of ornamentation when calculating repair frequencies. In the fossil record, adaptations are best developed in the Pliocene, and diminish sharply in abundance across the Plio-Pleistocene boundary coeval with a regional extinction event. The use of an ecometric approach, which advocates using the presence or absence of traits to assess environmental and ecological conditions, suggests that the maintenance of adaptations following the extinction event was diminished, likely as a combined response to both deteriorating environmental conditions and lower predation rates. Higher predation rates and more permissive environmental conditions in the late Pleistocene and Recent are correlated with increased abundance of defensive features.