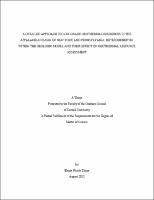 The potential to utilize widespread low -grade geothermal resources of the Northeastern U.S. for thermal direct use and combined heat and power applications can be realized using technologies embodied in Enhanced Geothermal Systems (EGS). In lower grade regions, accurate knowledge of small variations in te mperature gradient will be crucial to the economic viability of EGS development. In order to facilitate EGS project placement and design, this study draws a more complete picture of geothermal resources in the Northeastern United States-with a particular focus on New York and Pennsylvania-by incorporating thousands of new temperature-depth data collected as a result of continuing drilling for petroleum and natural gas in the region. Using these new data, a series of maps covering the Appalachian Basin of New York and Pennsylvania were produced that show variations in subsurface thermal gradient, surface heat flow, and projected temperature at depth . The increased spatial accuracy and resolution compared to earlier geothermal maps of the Northeast U.S. illu minate better spatial variations in the resource quality, and have a much smaller degree of uncertainty in both extent and magnitude. The maps indicate that the temperatures required for direct -use applications are available at economically viable drillin g depths (shallower than 6 km) over a majority of the region. Although much was learned by using a simplified geological model of the Appalachian Basin of Pennsylvania and New York that enabled the rapid incorporation of temperature-depth data, geologic heterogeneities must be incorporated into the sedimentary model with corresponding heat flow and temperature at depth calculations in order to better represent the availability of low-grade geothermal resources. An improved sedimentary model accounts for Precambrian faults and variations in overall sediment thickness that result from those faults in the state of Pennsylvania. Visual comparison of the maps produced using the initial, simple model shows that the location of the Rome Trough half-graben in the southwestern and central parts of Pennsylvania aligns with a trend of above-average geothermal gradient (30°C/km) and heat flow (70 mW/m2) in an area of high data density. Thus the geologic model was refined to include the strata filling the Rome Trough, with a concomitant adjustment in the equation for the projected temperature at depth. It is possible that the Rome Trough basement faults are related to the locations of basement intrusions and enhanced deep basin fluid flow , which could result in increased radiogenic heat generation and convective heat transport, respectively . Evaluation of these variables across the study area would increase certainty regarding the location of temperature anomalies and help to better identify areas with ideal charact eristics for EGS development.