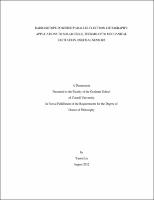 This thesis presents a new potentially low-cost massively parallel electron lithography system, which we term as RadioIsotope-powered Parallel Electron Lithography (RIPEL). We demonstrate its applications to solar cells, thermo-opto-mechanical excitation, inertial sensors, micro-speakers, ultrasonic mechanical DNA sensors. RIPEL utilizes the spontaneously emitted high-energy electrons from beta-emitting radioisotope thin films to parallel expose electron sensitive resist on the wafer, through a nano-stenciled mask that is placed in proximity to the wafer. This approach enables massively parallel e-beam lithography, with the possibility to expose very large areas concurrently as the source of electrons can be made very large. This method potentially eliminates the need for vacuum systems and the electron focusing column as needed in the existing electron beam lithography systems because the electrons emitted are not focused and are emitted close enough to the substrate. This technology will greatly simplify the overall electron lithographic system and reduce the cost of deep-sub nanometer lithography. RIPEL has been demonstrated to show promising applications to various fields, including solar energy harvesting, photonic crystal based NEMS and inertial sensors. Ordered nanostructure arrays, with large-area controllable spacing, orientation and size, are promising for high-efficiency solar cells, due to the strongly enhanced light trapping, high carrier collection efficiency and potential low cost. Available top-down lithography approaches to fabricate large-area ordered nanostructure arrays are challenging due to the requirement of both high resolution and high throughput. We have used RIPEL to fabricate ordered silicon nano-conical-frustum array structures, leading to high-efficiency (up to 10.8%) thin-film (5 [mu]m thick) solar cells. Furthermore, these photonic crystal nano-structure arrays have been integrated onto a thin membrane, enabling highefficiency opto-thermo-mechanical remote excitation for MEMS systems. The membrane structure has been used for an optically excited micro-speaker and optically transduced mass sensor. The same structure demonstrates an ultra-low threshold for chaotic motion due to a very large air-damping, which is due to the large effective surface area. RIPEL has also been used to fabricate inertial sensors, which show small device variations due to the high manufacturing precision of RIPEL system.