Women'S Liberation And The Moral Individualism Of Ru 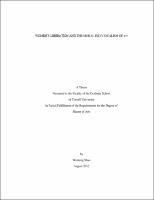 May Fourth Movement is often credited with women's liberation. Yet before the word "liberation" is overused, it is necessary to talk about what is behind this fabulous word. Chapter one will mainly discuss whether women needed such liberation and whether the May Fourth Movement really helped women to be liberated. The conclusion tries to argue that the May Fourth Movement did not liberate anyone. It simply changed people's way of living; women were the focus. After May Fourth Movement, Confucianism, ru as translated here, has experienced ups and downs, and reenters Chinese people's life, as both an ancient thought and a remodeled imported study. Chapter two tries to argue that ru cannot be taken as a pure religion, or mixed up with Marxism. Moral individualism within Confucianism is a practical philosophy. To better understand moral individualism within Confucianism, the best way is to go back to Confucian classics.