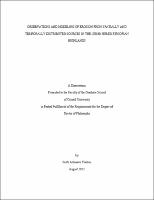 Despite long term efforts to reduce erosion in the Blue Nile Basin, river sediment concentrations have not declined. Lack of progress on sediment reduction indicates that runoff and erosion processes are not fully understood. The objective of this dissertation was, therefore, to understand runoff and erosion processes by investigating where runoff and erosion takes place in the landscape and to use this information to model erosion. Runoff processes were investigated in Debre Mawi, a 95-ha watershed south of Lake Tana. During the rainy period of the 2010 and 2011 monsoons, storm runoff and sediment concentrations were measured from four subwatersheds and at the main watershed outlet. In addition, perched groundwater tables, infiltration rates, rill erosion from agricultural fields and gully expansion were measured. The results show that saturation excess runoff was the main runoff mechanism because median infiltration rate was only exceeded 3% of the time. Early during rainy period, runoff produced from shallow soils upslope infiltrated before it reached the outlet, and sediment concentrations were very high as rill networks developed on the ploughed land. At the end of July, the bottom lands became saturated, the runoff coefficient at the outlet became greater than upslope areas and rill networks were fully developed reducing the velocities and thereby the sediment concentrations. A semi-distributed hillslope erosion model relating sediment concentration with overland flow using only four calibrated sediment parameters was developed based on input data from various watersheds in Blue Nile Basin. The erosion model assumed that sediment concentration is transport limiting at the beginning of the rainy phase when lands are plowed and source limited at the end. Overland flow was simulated with the semi-distributed water balance hydrology model. The model predicted daily sediment concentrations well in three small watersheds including the Debre Mawi as well as in the Blue Nile Basin at the Sudanese border. The implication of this research is that shallow degraded soils and bottom lands with gullies are the greatest sediment sources and should be targeted for erosion control.