The Eosinophil Regulates Immunity To The Parasitic Nematode Trichinella Spiralis 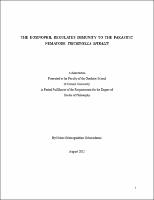 Parasitic diseases pose a significant burden on the health of millions of people. Chronic helminth infections are typified by enhanced Th2 responses. Understanding how Th2 immunity is regulated is important for developing effective treatments for parasitic diseases and other Th2 disorders. Infection of mice with Trichinella spiralis is an especially useful model system to study the development of Th2 immunity to a natural pathogen. Eosinophilia is a prominent feature of T. spiralis infection, and we have shown previously that in eosinophilablated, transgenic mice, T. spiralis larvae die in large numbers in the muscle. Death is promoted by inducible nitric oxide synthase (iNOS). Neutrophils and F4/80+ CD11b+ Ly6C+ macrophages produced iNOS. Compared to fully developed muscle larvae, growing larvae were more susceptible to NO mediated killing in vitro. Larval growth was impaired in eosinophil-ablated mice, potentially extending the period of susceptibility to NO mediated killing. These changes were associated with reduced numbers of Th2 cells in infected muscle. Reduction in Th2 cell number was not caused by poor recruitment, but rather by impaired Th2 cell production in draining lymph nodes. Adding back eosinophils into [DELTA]dblGATA recipients improved parasite growth and survival, as well as Th2 cell accumulation, supporting the role of the eosinophil in parasite retention and local immune regulation. i The influence of Th2 immunity on parasite growth was tested using mice deficient in STAT6 and IL-13. The results reveal that the IL-4/STAT6 axis is a key pathway that regulates parasite growth. Transcription of genes associated with nutrient deprivation was increased in muscles of infected eosinophil-deficient mice, but glycogen content of muscle larvae and muscle tissue was not altered by eosinophil deficiency. Taken together, the results show that eosinophils and STAT6 promote parasite establishment in the muscle by promoting larval growth while coincidentally inhibiting the Th1 immune response. ii