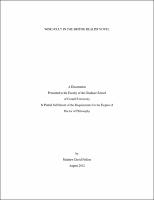 This dissertation proposes that British novelistic realism of the nineteenth century is not an authoritative form designed to represent a fixed reality and elicit readers' assent to it. Instead, realist novelists, including Walter Scott, George Meredith, George Eliot, and Rudyard Kipling, use formal practices I call "wise folly" to perform an ambivalent authority that invites disagreement. With a history that can be traced through such earlier sources as Plato's dialogues, Erasmus's writings, and Shakespeare's fools, wise folly unfixes standards of wisdom and folly in a work and complicates ethical judgments. Through close readings of forms of wise folly in realist novels, this dissertation revises conventional conceptions of the realist narrator as a rhetorically coercive voice and realism as a pretense to omniscience, proposing instead that realist novels, as formed objects apprehended by readers, are a means for negotiating diverse views of reality. The introductory chapter, "Wise Folly and Narrative Discourse," outlines the concept of wise folly and, through readings of Tristram Shandy and Vanity Fair, explains its role in the emergence of a specifically realist narrative discourse. The second chapter, "Narrative Authority and George Meredith's Gnomes," examines gnomic utterances such as aphorisms, maxims, and epigrams in Meredith's work, arguing that Meredith uses these utterances to construct an ambivalent narrative authority. The third chapter, "George Eliot's Pharmacy," explains the function of scapegoat figures who occupy the margins of Eliot's novels and who, from those margins, trace the limitations of the dominant ethics in the novels. The fourth chapter, "Learning We Are Fools," addresses the desultory status of literary quotation and allusion in the novels of Scott and Meredith, where the literary can be a source of folly and where education is an inherently intertextual process, fraught with error, through which one acquires means to understand the world. The fifth chapter, "If: Aesthetics and Ideology Revisited," situates play in Kipling's Kim within the context of wise folly and aesthetic theory, and describes Kipling's canny treatment of knowledge in Kim, which employs Orientalist and other modes of knowing even as it imagines the impossibility of sure knowledge.