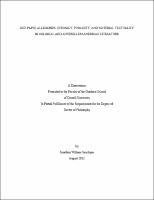 "Our Paper Allegories" argues that throughout the colonial and antebellum periods in the United States, the artifact of paper frequently operated as an archive of intimate gendered, sexual, racial, and communal relations and histories. Early and nineteenth-century American writers animated these relations in what I call, adapting a phrase from Herman Melville, "paper allegories," or works that create elaborate constructions of affiliation or subjectivity by drawing attention to the paper-based materiality of the text. The Habermasian model of the public sphere has heavily influenced scholarship on early American print culture. In that model, paper, the "body" of the text, recedes from perception in service to the "soul" of print, ideas. This dissertation, in contrast, shows that because American readers and writers were themselves often part of, or at least conscious of, the papermaking process - until 1867 paper was made from linen and cotton rags often recycled from individual households - they were sensitive the potential for narrative to be embedded within, not solely imprinted upon, paper. These "paper allegories" tended to focus on women's bodies and the queer qualities of public intimacy. This dissertation analyzes the ways in which Anne Bradstreet, Lydia Sigourney, Herman Melville, William Wells Brown, authors of ephemeral texts, and others wrote about the materiality of print, each emphasizing the meanings embedded within paper. This dissertation advances the study of print culture and the history of the book by showing how studies have tended to privilege printed text or written words in a way that does not fully account for how early American and nineteenth-century U.S. readers cultivated a sense of the page, a sense that the shredded rags within represented their bodies, identities, labors, and communal and affective ties to one another.